Bigg Boss 13 winner Sidharth Shuka took to Twitter to share a wise thought. "Being told you're not good enough can be a wakeup...
Read more
Bigg Boss

Dad was Surprised When I Told Him About My Participation,...

Former Bigg Boss 13 contestant Himanshi Khurana was rushed to the hospital on Monday morning in Ludhiana, two days after she tested COVID positive. The actress-singer has shared a series of pictures on her Instagram story, while she is recovering in the hospital.

The actress has posted a photo of the hospital room table, showing specifically the showpieces that show the love of her dear ones that his helping her to heal faster. And another one is a screenshot of her video call with her brother Apram Deep, whom she lovingly calls Appu. 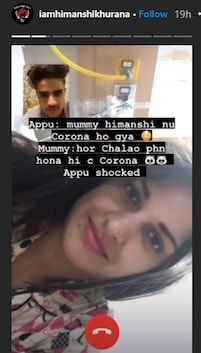 Himanshi had lately participated in the farmer’s protest that took place after the farmer’s bill was passed in the parliament. She took to her Instagram account to inform her fans and followers about having tested positive for COVID-19.

Farmers in Punjab and Haryana are protesting against the new farm bills, which have been passed in both the houses of the parliament. Many celebrities like Diljit Dosanjh, Harbhajan Mann, Ammy Virk and Sargun Mehta have come out in support of the protesting farmers.

On the work front, Himanshi featured recently in a Punjabi song titled Khyaal Rakhya Kar with boyfriend Asim Riaz. Himanshi also suffered from Polycystic Ovary Syndrome (PCOS) and was reported to undergo an operation for the same earlier this month after her condition worsened.

James Bond: No Time To Die: 5 Looks Of Daniel Craig From The Trailer Which Are Worth A RewatchAfter making us wait for...
Read more

Mirzapur 2 To A Suitable Boy: Spend Your Dussehra By Watching This Amazing Content!

Mirzapur 2 To A Suitable Boy: Spend Your Dussehra By Watching This Amazing Content!We are just a few days away from celebrating Dussehra. However,...
Read more

ED To Register Fresh Case On The Basis…

Disha Patani Is Prepping Herself Up For Salman Khan’s Radhe

Bigg Boss 13's Asim Riaz took to Instagram to announce his next project. The model-turned-actor shared a picture of himself and in the...
Read more
Hot Topics

“Filmmakers Call Me Complaining About OTTs”

From Being In Run With Naseeruddin Shah-Smita Patil To Her Chemistry With Ben Kingsley, Rohini Hattangadi Remembers Her Oscar-Winning ‘Gandhi’

From Being In Run With Naseeruddin Shah-Smita Patil To Her Chemistry With Ben Kingsley, Rohini Hattangadi Remembers Her Oscar-Winning ‘Gandhi’The year was 1982, Ben...
Read more