Kim Kardashian Asks Kanye West Not To Be ‘Messy’ In...

Kim Kardashian and Kanye West are one such couple who have been grabbing all eyeballs for a long time now. Their marriage has hit...
Read more
Hot Topics

Ever since Millie Bobby Brown embodies Enola Holmes in Netflix’s hit original, the world has not been the same. Everyone across the globe has...
Read more
Hot Topics

Rihanna Wants A$AP Rocky To Be Her ‘Final Boyfriend’, Wants...

Rihanna has been grabbing all eyeballs for her friendship with A$AP Rocky, which has recently turned into romance. We love the way these two...
Read more
Hot Topics

Star Plus’s longest-running show Yeh Rishta Kya Kehlata Hai has taken a very interesting turn and got all the viewers on the edge of...
Read more

Gigi Hadid hasn’t shared a complete look of her daughter, Zigi yet and fans are craving for it since the time she became a mom. Though the supermodel has started giving little looks of her it’s only teasing us and making us want to take a better look at her.

Recently Gigi Hadid’s mother Yolanda also shared an adorable pic of the model and her daughter on Instagram Stories. In the pic, we can see Gigi planting a kiss on the cheeks of ZiGi and it makes for a heart-melting shot. Yolanda has used a bunch of heart emojis on the pic and also a GIF which says, “you are my sunshine” 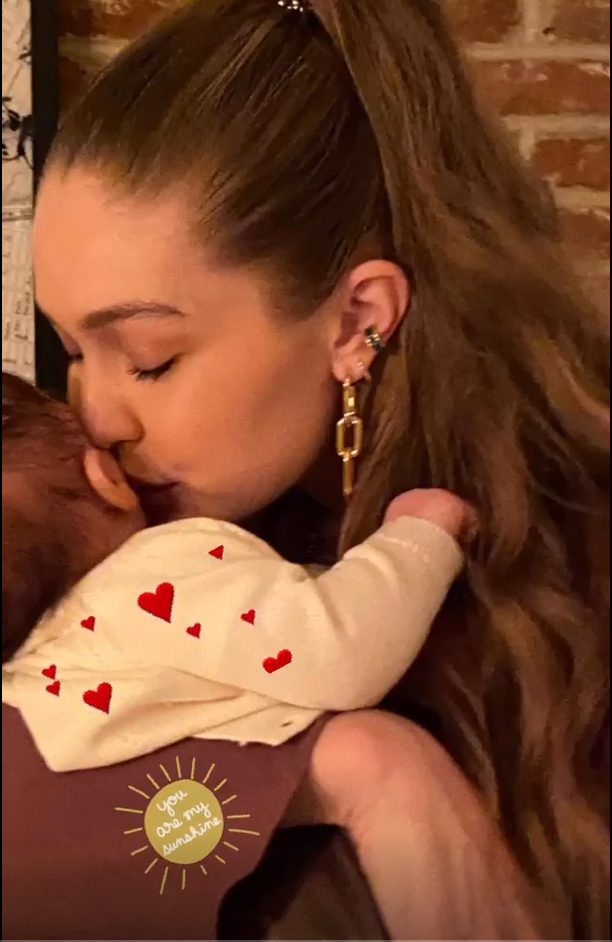 Gigi Hadid recently celebrated 1st Thanksgiving after the birth of Zigi. While it was heartening to see the setup for celebrations the presence of Zayn Malik was missed.

Meanwhile, Zayn Malik’s mother Trisha Malik celebrated her 51st birthday recently. The former One Direction singer and Gigi arranged a special cake to celebrate her birthday. The supermodel took to her Instagram stories and shared some pictures of the occasion.

The newly-turned parents marked Mamma Malik’s birthday in their own way. The photo shared on Instagram showed that the couple put together a diamond-shaped cake surrounded by strawberries. Two candles “5” and “1” were also placed on it. Some decorations were also added on top of the cake, which read “51 & Fabulous”.

Gigi Hadid and Zayn Malik also recently celebrated Halloween. The supermodel decided to give fans a look at their happy family on the occasion of Halloween 2020. So she took to Instagram and shared the first family photo, where she can be seen posing alongside former One Direction singer and baby ZiGi in the same frame dressed up for the occasion. Zayn also channelled his love for Harry Potter in the picture.

However, it was baby ZiGi that took the limelight. The little munchkin can be seen comfortable in her dad’s arms while he gazed at her adorably. Even Gigi couldn’t take her eyes off as she clicked the picture.

Must Read: Hugh Jackman Takes A Dig At Ryan Reynolds Yet Again In A New Video, Deadpool Actor Says, “Let My Mom Go”

Varun Dhawan’s Car Meets With An Accident In Alibaug Before The Wedding Day? Deets Inside!

It is a big weekend for the Dhawan’s and Dalal’s after all their son and daughter are getting married. As we all know that...

Aamir Khan’s Daughter Ira Reveals Of Getting Se*ually Harassed At 14 (Pic credit: Instagram/khan.ira)Ira Khan has said that she was se*ually harassed at 14....

“The Term ‘Goriya’ Has Been So Often Used”

“We Didn’t Talk About My Dispute With BMC”

James Corden DENIES Replacing Ellen DeGeneres As The Host, Says “There Is Absolutely No Truth…”

James Corden DENIES Replacing Ellen DeGeneres As The Host, Says “There Is Absolutely No Truth…” (Photo Credit: Instagram/James Corden & Getty Images)Ever since the...

Disha Patani Flaunts Her Curvaceous Figure In A Neon Fluorescent Bikini, Check Out

INDOO KI JAWANI is a fun-filled entertainer and deserves to be watched for its plot, realistic setting, humour and Kiara Advani’s adorable performance.

Enola Holmes 2: Millie Bobby Brown Starrer To Have Moriarty As The Main Villain?